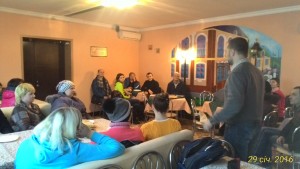 One of the truths that I speak about a lot in my training and coaching in Europe is the importance of focusing on incarnational ministry (going to people on their territory instead of waiting for them to come to us). John 1:14 in The Message translation has a good way of expressing how Jesus modeled this: The Word became flesh and blood, and moved into the neighborhood.

On my recent winter trip, I was thrilled to see believers truly incarnating the gospel – living it out in the neighborhood.

In Ukraine, I had the blessing, but sobering experience, of traveling with Igor Tunik to Ocheretino, a village in eastern Ukraine that has been directly impacted by the war and the resulting refugee and economic crisis. Igor and his team began to travel to this village to feed people and to meet medical needs. They would regularly ask people if they would like to study the Bible and hear about Jesus. The response has been so positive that Igor says he has not seen such spiritual hunger since the fall of communism.
Later I traveled to Masis, Armenia to visit Tigran Ghazaryan, a church planter who sells milk both to provide for his family and to find people of peace (Matt. 10/Luke 10) who are open to the gospel and studying the Bible. I was especially touched by our visit with a refugee family from Azerbaijan. After just a couple of times buying milk, this family responded to Tigran’s invitation to read and study the Bible together.  The mother and her adult daughter committed their lives to Christ within a few months. Now other families from the same area also join in on the weekly Bible study.
We are so encouraged to see Jesus changing lives as people are willing to follow His example of going to seek and save the lost (Luke 19:10).