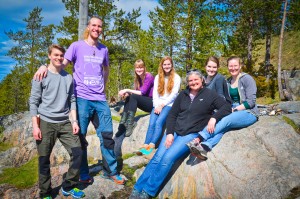 It is always exciting to see how God unfolds a journey of Kingdom expansion! Through a network of people, the elders of Riverbend Community Church in South Carolina began a partnership with a national church planter in northern Sweden. Having a common vision of movement with a key strategic piece in university ministry, there was an immediate connection and bond that has continued to grow over the years. After four years of sending teams, the Lord opened a door for me to move to Luleå, Sweden full time in 2013. For the last two years, it has been exciting to see a team of Swedes step up and grow as disciples and disciple makers owning a vision for their city. With less than 3% of evangelical believers in Luleå, there is great need to take action to see every subculture hear and respond to the gospel. As the team in Luleå is growing, we have begun to take steps to start a new partnership in Stockholm in order to work towards a strategic vision to see all of Sweden reached with the gospel. Besides the reality of the 10/40 window living throughout Sweden, as well as the increased numbers of refugees seeking asylum here, Swedes have the opportunity to use their political relationship to step across many borders that an American cannot. My focus is on discipleship training so that every believer can be confident in living a lifestyle of discipleship in the context of life God has given. With more seeds sown, it is only a matter of time until new churches will be formed.